This one was one of my earlier commercial commissions. DJ Kizra wanted me to design him a business card because he was about to run out of his old supply and because his old ones were awful (don’t tell him I said that). The old business card was pretty plain on the front, but on the back of the card had small photos of the different types of events he does. Which wouldn’t be half bad, but the problem was none of the photos were of a printable resolution, so the actual cards came out all blurry.

DJ’s are supposed to bring fun a good times to a party, right? So I thought I would try to bring that idea to his business card. The card is fun, and playful. You too could be dancing like the silhouettes in the card if you hire DJ Kizra. That what I was trying to say in graphic form. 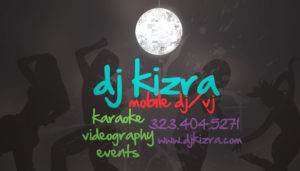